Hospital for Special Surgery in New York City has pioneered a lot of innovation. This time it’s digital pathology. They’re all in with research and consultation and dawning with primary diagnostics, thanks to a jump-start from COVID-19, and a recent FDA clearance of Sectra Digital Pathology Solution for image viewing. “It’s a game-changer,” says HSS pathologist-in-chief, Thomas Bauer, MD, PhD. The solution makes it possible to move toward fully integrated diagnostics, especially in complex orthopedic cases. And it’s a model other healthcare systems can emulate.

HSS’s digital pathology program launched in 2017 with Bauer’s arrival. It was a good match.

HSS has a long history in orthopedic excellence, holding the No. 1 position in orthopedics in U.S. News & World Report 10 years running. And Bauer has a long history with orthopedics and digital pathology, having joined HSS after co-pioneering the field in Cleveland Clinic’s Department of Pathology during his time there from 1983 to 2017.  As a pathologist specializing in orthopedics and biomaterials, he became medical director of e-pathology at Cleveland Clinic and was tasked with adding the digital edge to pathology. Bauer and his team there were involved in the logistics of scanning, pathologist education and performing validation studies that compared pathologists’ interpretation of microscope and digital images for primary diagnoses, frozen sections diagnoses and consultation cases. The researchers also were instrumental in multicenter trials that led to the FDA clearance of Leica’s Aperio AT2 Digital Pathology System.

Fast forward to 2020. Bauer and his team at HSS are focused on pushing digital pathology across the HSS enterprise.  Bauer and co-leaders are currently sharing images of selected cases, and anticipate rolling out interpretation of a limited number of scanned pathology images for diagnosis sometime this fall. A full range of primary diagnostic services begins early in 2021.

“Allowing surgeons, radiologists, and other physicians to confer with pathology while viewing images wherever they are has a very positive effect on patient care,” Bauer says. “Access to digital pathology images, side by side with radiology images in the same system, enables more efficient discussions and the ability to give detailed descriptions of findings in complex cases.”

Bauer’s close colleague, orthopedic surgeon Alejandro Gonzalez Della Valle, MD, is on board with the benefits of rad-path convergence. “The ability of interacting live with the pathologist will likely allow the orthopedic surgeon to gain a deeper understanding of pathology,” he says.

Radiologist Douglas Mintz, MD, echoes them both, adding, “I see this collaboration of care offering a new clarity of findings, a confirmation among the physicians conferring, and expedited and appropriate care for patients.”

Early April also brought the FDA clearance of the Sectra Digital Pathology Solution, HSS’s choice for viewing and sharing with their whole-slide imaging platform. The system extends their Sectra Enterprise Imaging (EI) system used across radiology to pathology as well.

The third piece was an upgraded slide scanner (Aperio AT2), which was greenlighted within HSS sooner than expected due to the pandemic and will be online this summer.

Here’s how it works

The HSS team is now playing a key role in developing models to share with other facilities that are adding the Sectra Digital Pathology Solution. The hospital’s IT department at the main campus in Manhattan has interfaced their current slide scanner (Leica/Aperio CS2) with their laboratory information system (Epic Beaker) and Sectra Enterprise Image Management system so pathologists can scan a microscope slide and upload it directly to the EI system. HSS also has started adding placeholders in the EI system for digital pathology images for testing and sharing, Mintz notes. Orthopedic surgeons, radiologists, pediatricians, endocrinologists and rheumatologists can view and navigate the entire digital slide directly from EI while simultaneously viewing radiology studies.

“The workflow of the Sectra system was originally designed around radiology so that’s why we need to have [Epic] Beaker integrated,” Bauer explains. “It uses a slightly different workflow for assigning cases and validating diagnoses. Our text is turned into a pathology report that lives in Beaker. But all radiology and pathology images live together in one location for easy access and review.”

With digital images of tissue samples instead of physical glass slides, HSS pathologists, surgeons and radiologists can access current and historical images and related data as well as utilize the digital tools. Physicians also can access a full case overview that includes images from different scanners with different file formats, macro cameras, all medical images including intraoperative and patient data. 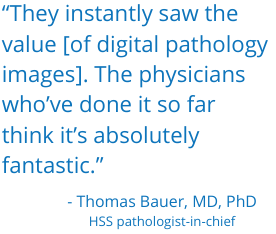 “Fantastic” is the word Bauer uses to describe the digital image quality he’s now seeing. “The resolution of routine scans is perfectly satisfactory for diagnostic surgical pathology, and you can zoom to any magnification and bring up tools with one click.”

One tool offers linear measurement, much like Google Earth, with the physician clicking on a key area of the image, moving the cursor and clicking again. The system measures the exact distance to margins or measures lesion size or depth of invasion of malignant tumors. “It’s so much easier to measure digitally than with a microscope,” Bauer says.

When they first starting using digital pathology images across the healthcare system, referring physicians could call Bauer confused at what they were looking at. “They caught on very quickly when we got on the phone and looked at images together,” he says. “They instantly saw the value. The physicians who’ve done it so far think it’s absolutely fantastic.”

He also likes that, for complex cases, two or three physicians can view the same images simultaneously. “You can exchange control so that, for example, I can navigate, zoom and annotate the slide,” he says. “Or the surgeon remotely can do the same thing. No more need to come to pathology and view images on a two-headed microscope. We can confer instantly on a phone call.”

The way the work flows now at HSS, a pathologist identifies a key finding in a specimen and has the slides scanned and automatically uploaded to Sectra. He or she sends a note or calls the surgeon to relay that the case is available. The user logs into Sectra and searches by patient name or medical record number. Up pops a list of all relevant imaging studies and exam dates. Pathology images are displayed there too—without having to log in to the pathology information system.

As Della Valle sees it, the system is “very intuitive for an orthopedic surgeon. I like the fact that I can call the pathologist so he or she can walk me through the histological findings on an image that we can both see, live, and without leaving our offices. Before digital pathology, I would have to arrange time to go to the pathology department to see images on a microscope. In this regard, digital pathology is likely to increase multidisciplinary collaboration.”

While there are slight differences between pathology and radiology in modes of image viewing, Mintz says the system is easy to navigate for physicians accustomed to manipulating images on a phone or computer.

Mintz also finds viewing pathology images is far less complex than radiology, largely because of the number of toolsets. “What was immediately obvious is it’s so much easier to look at and manipulate digital radiology and pathology images on one system,” he explains. “Having specific cases called out also offers more information-filled images for us to see.”

Having the right displays are key to rad-path viewing as well—especially for radiologists who often read on grayscale monitors. A color display is needed if they’ll be reviewing more digital pathology images over time.

HSS has seen a number of advantages accrue from the addition of digital pathology. One is new radiology-pathology correlation conferences, according to Mintz. Run by radiology fellow, these video meetings bring together radiologists, pathologists and trainees (residents and fellows) to view and confer on radiology and pathology images on the common enterprise imaging platform. “Like in-person meetings, physicians show images on their shared screen, then show the histology, often magnifying to show details,” he says. “It’s a very effective way to get physicians together, using one system to review both radiology and pathology images in concordance. It streamlines multidisciplinary team meetings.”

Another perk is playing out as radiology residents gain more fluency with pathology images. “Our trainees are supposed to know pathology,” says Mintz. “But they haven’t done that for several years now. When we had the fellows running the video conference, they pulled up the pathology, zoomed into the area of interest and showed it so the pathologist didn’t have to do the remote manipulation. This will be really useful to make our radiology fellows learn to look at slides far more often just because they have access to them.”

Fully implemented, the benefits for pathology are many: bolstering pathologist efficiency and reach, allowing them to work from home with full access to digital images, cutting patient wait times, simplifying physician consultations and multidisciplinary team meetings (MDTs), and offering truly data-rich decision-making. And for patients, the benefits of consults among specialists can potentially change diagnoses and care.

Access and reach are two more advantages. For geographies with limited pathologists or limited subspecialty pathologists, digital pathology plays a key role as a consultative vehicle with subspecialists. “Even in areas where we do have a lot of subspecialists,” Bauer notes, “we still want to share cases and get other opinions.”

With an eye toward AI, Bauer sees a future with systems counting tiny cells, evaluating margins of resections and finding unusual deviations. “The combination of AI and digital pathology will be very good in identifying rare events—things like rare cell types or bacteria that usually require prolonged, intense work to find or exclude using microscope slides.”

He says it won’t take long for HSS to recognize time savings and greater efficiencies among pathologists, radiologists and surgeons.

Mintz sees the imaging world both expanding and contracting, with pathologists and referrers going back to a number of years ago when it was more common for physicians to visit pathology more often to view key specimens. “It’s kind of a shame, because there is so much to gain from that interaction. But now we’re seeing a renewal of that interaction. We’re connecting on the phone and looking at images together. Learning occurs with each of those interactions. We all benefit from that.”

Bauer sees this evolution reawakening an interest in pathology among other specialists. “This will greatly facilitate getting consultation diagnoses, and that should raise the level of confidence that everyone has in their final diagnosis.”

Across the board, the HSS physicians all agree digital pathology united with radiology brings new tools and opportunities for collaboration. “I see a new way of enhancing communication between the pathologist, the orthopedic surgeon and the radiologist to provide individualized and multidisciplinary care,” says Della Valle.

Mintz concludes: “It’s about viewing histology together so all physicians involved know they’ve made a definitive decision on a case. There are no doubts."